If Seeing Is Believing, a Panorama of Truth ( flight ) 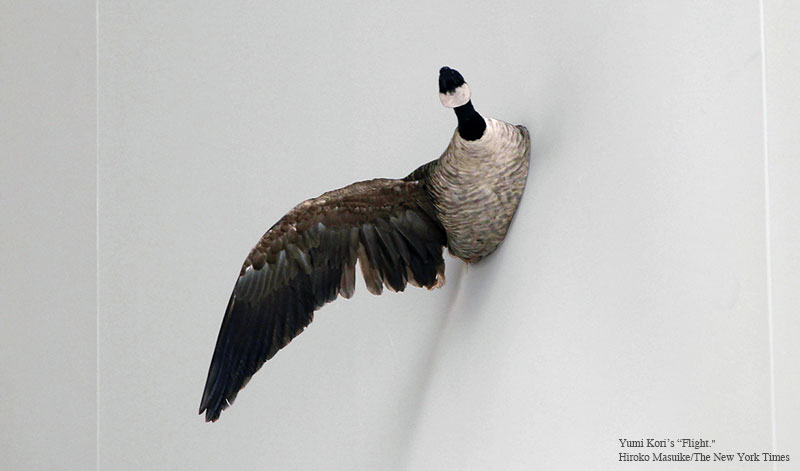 ‘Bringing the World Into the World,’ at the Queens Museum
The Queens Museum has a big advantage when it comes to the familiar curatorial tactic of using older works from its permanent collection to inspire an exhibition of contemporary art. At the museum’s figurative and actual heart lies one of the great visual wonders of New York: “The Panorama of the City of New York,” a nearly 10,000-square-foot miniaturization of every building, street, park and bridge in the five boroughs, complete with day-night lighting cycles and tiny planes zipping in and out of La Guardia and Kennedy along almost-invisible wires.

No matter how many times you see it, “Panorama” is an almost certain thrill, like a visit to the top of the Empire State Building. It was ordered up by the demonic master builder Robert Moses for the 1964 World’s Fair, which included the building now occupied by the Queens Museum, making it 50 years old.

Now, “Panorama” is the point of departure for “Bringing the World Into the World,” an intermittently rewarding if ambition-challenged exhibition — including a few commissions — by 15 mostly contemporary artists, organized by Hitomi Iwasaki, the museum’s director of exhibitions and curator. One way or another, their work relates to “Panorama,” either directly or generally through its immersive quality, compression of scale, space and information, visual spectacle and, especially, its meticulous to reality.

The artists hail from several generations and countries. Some, like Lawrence Weiner and Chris Burden, are veritable éminences grises — if not predictable presences. A few, including the Italian Arte Poveriste Alighiero Boetti and the designers Ray and Charles Eames, are dead, as is Moses, who is included on the show’s checklist as the creator of “Panorama.” Still others are widely known midcareer artists like Harun Farocki and Dominique Gonzalez-Foerster, while a handful are relatively new to New York.

The show’s title comes from a Boetti work, “Putting the World Into the World.” The participants’ brief, a news release said, is to explore “the physical experience of the acts of seeing, seeking and searching for the world.”

In other words, get ready for a lot of information presented in more or less interesting and sometimes ingenious ways, even if the visual impact is so low that several works are essentially invisible. In keeping with curatorial and artistic fashions, the works display a disdain for aesthetic decision making, a fear of form and a noticeable disinterest in color. There’s not a painting or much of a pictorial nature in sight.

(The work that comes closest is Boetti’s 1973 “Onomino,” a series of 11 large collaborative drawings in blue ballpoint pen that are similar to the piece the show is named for. But I kept wishing he were represented by one of his big, colorful, world-map tapestries — made by weavers in Afghanistan — which would have given the show a very powerful visual anchor.) Continue reading the main story

Instead, the works tease the brain, like successful science projects, and play against the reduction in scale of “Panorama.” The most extreme is “NanoQMA” by Jessica Rylan, an artist and engineer who created a model of the Queens Museum that has been placed inside the model of the museum in “Panorama.” (Its scale is 1.4 million inches to 1 inch; that of “Panorama” itself is 100 feet: 1 inch.)

Somewhat more visible is Chris Burden’s “Scale Model of the Solar System” from 1983 (before Pluto was downgraded to a dwarf planet), whose scale by way of comparison is around 4.2 trillion inches: 1 inch. The sun, a shiny sphere 13 inches in diameter, hangs above the Bronx. Earth is just outside the main entrance to “Panorama” and no larger than a BB, while some of the other planets are actually displayed elsewhere in Queens, as indicated on a handout.

The immense scale shifts illuminated by these works are trumped by the Eameses’ classic 1977 film “Powers of Ten,” which zooms out from a lakeside picnic in Chicago and transports us to the outer edges of the galaxies and back to the subatomic level, beneath the skin of a picnicker, in a brief nine minutes. Seen on a monitor set into the glass floor of the “Panorama” viewing balcony, it implies a dizzying column of vertical space in contrast to vast horizontality of “Panorama.” And “Flight,” by Yumi Kori, a taxidermic Canada goose that appears to be flying above “Panorama” (and through a wall), recasts the city as real and far below.

The best pieces in the show take less straightforward approaches to the panoramic. Especially outstanding is Mr. Farocki’s “Deep Play,” of 2007, a mesmerizing 12-channel video projection of soccer games that fleshes out conventional broadcast views with various animations and statistics. These dissect and quantify the action, following the course and speed of different players or the path of the ball, creating a stunning, yet humbling experience of seeing.

In contrast to Mr. Farocki’s teasing out of time, Hikaru Hayakawa, a Los-Angeles based Japanese artist, has created an implicitly panoramic compression. In “Panta Rhei (4,000 years of human history),” he tracks the rise and fall of civilizations, cultures and nations, and the wars that shaped them, in an elaborate bristling mass of carefully labeled copper piping that can also function as a fountain. One of the few handmade objects in the show, it is an appealing three-dimensional timeline that also suggests a failed machine, which may be fitting given some aspects of human history at the moment.

Other selections are so obvious they almost seem perfunctory. This is especially true of Mr. Weiner’s “As Far as the Eye Can See,” which is simply those words written large in his characteristic font across a wall. Ms. Gonzalez-Foerster’s 2006 “Parc Central” visits 13 cities, Taipei to Paris, in a casually shot, 50-minute film that is most engaging for its original soundtrack.

In “Magnetic,” a circle of 14 video monitors arranged in back-to-back pairs, Tavares Strachan gives us a panoramic view of the often-overlooked African-American explorer Matthew Henson (played by Strachan) reaching the North Pole. The sense of being on top of the world in seemingly infinite, mostly white space, is exhilarating.

Other pieces simply enact current art formulas. Liu Wei’s “Library II-II” carves imposing chunks of urban landscape (lots of skyscrapers) out of used books. Clarissa Tossin wads up pieces of paper and draws the world’s continents on them. The Reanimation Library, a project by Andrew Beccone of Brooklyn, an artist and librarian, is a nearly encyclopedic three-wall display of used books that sustains a somewhat nostalgic browse but not much more, although some might find useful the chance to scan pages in them.

Interactivity is also the goal of “Heaven’s Corners (New York)” by L+, a collective of three Hong Kong-based artists. They have painted the ceiling of a nook blue, added a fluorescent light and invited residents of top-floor corner apartments throughout Queens to meet and possibly paint their own ceilings blue.

Finally, Wong Kit Yi has taken a panoramic approach to the museum itself by inviting a feng shui master to analyze the galleries and finding solutions to achieve balance. In the gallery that the master deemed too “wet” — and by implication too feminine — Ms. Wong has added a big red pedestal bench, symbolizing fire. On it hang two monitors playing a video in which she interviews various art professionals, all male, about gossip, a habit associated with women. The variously relaxed, uptight or pretentious responses suggest that gossip is not all that gender-based.

As might be expected, there is little work here that is commensurate with the “The Panorama of the City of New York.” More disturbing is the feeling that not enough is trying to be.